The Atlanta Falcons have promoted LB Edmond Robinson to their active roster for Thursday’s game against the Panthers. 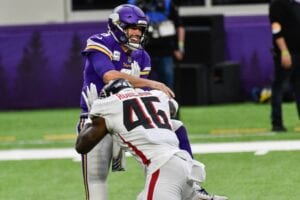 Robinson will revert back to the Falcons’ practice squad without having to clear waivers on Friday.

Robinson, 28, is a former seventh-round pick by the Vikings out of Newberry in the 2015 NFL Draft. He was in the third year of a four-year, $2.348 million rookie contract when the Vikings waived him.

The Jets later claimed Robinson off waivers before waiving him from injured reserve in 2017. He later had a brief stint with the Cardinals before signing with the Houston Roughriders of the XFL.

Robinson signed on with the Falcons this past. He’s been and off of their roster this season.

In 2020, Robinson has appeared in four games for the Falcons and recorded three tackles.