Of this group, the Falcons signed Bennett to their active roster.

Ayers, 32, is a former first-round pick of the Broncos back in 2009. He spent five seasons in Denver before signing on with the Giants in 2014. After two years in New York, the Buccaneers signed Ayers to a three-year, $19.5 million contract that includes $10.5 million guaranteed.

Ayers was set to make a base salary of $5 million for the 2018 season when the Buccaneers released him back in March. The Lions signed him to a contract last month but released him after one day with the team.

He recently worked out for the Vikings and Dolphins but left both teams without reaching an agreement.

The Panthers traded Ealy and a 2017 third-round pick to the Patriots in exchange for a second-round pick back in March. However, it didn’t work out for Ealy in New England and he was waived coming out of the preseason.

The Jets later claimed him off of waivers and he finished out the year in New York. The Cowboys signed him to a one-year contract back in April, but he was released coming out of the preseason.

He worked out for the Chargers and Dolphins but left his meeting without a contract.

In 2017, Ealy appeared in 15 games for the Jets and recorded 14 tackles, one sack, an interception and nine pass defenses. Pro Football Focus had him rated as the No. 61 edge rusher out of 106 qualifying players.

We both players featured in our Top 50 Available 2018 NFL Free Agents list. 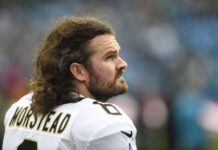