Free agent CB Chris Harris said in an interview with SiriusXM NFL Radio that he has drawn interest from five teams. 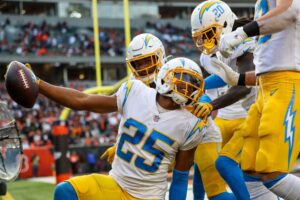 Harris is trying to figure the best fit for him, which would be with a contending team.

“Man, we’re definitely heating up,” Harris said. “I’m just taking my time and waiting to see what’s going to be the best fit for me. I’ve still got a little time, and I’m just waiting to make sure I pick the right team. Definitely looking for a contender.”

Harris referred to himself as a “position-less player” who can play corner, nickel or safety.

“I’m one of those guys that I’m just a DB. I can play all over the field,” Harris said. “Pretty much whatever a team needs. I’m just making sure I’m always ready and stay ready. Whatever role, I feel like I can go in there and compete and have a chance to definitely make some plays for a team.”

Harris, 33, wound up signing on with the Broncos as an undrafted free agent out of Kansas back in 2011. He has played all seven years of his NFL career in Denver.

From there, Harris agreed to a two-year deal worth more than $20 million with the Chargers in 2020.

In 2021, Harris appeared in 14 games for the Chargers and recorded 37 tackles, one interception and six pass deflections.