According to Ryan Dunleavy, the Giants are planning to start QB Jake Fromm in Week 16. 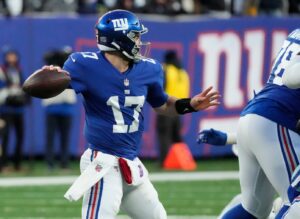 Giants HC Joe Judge mentioned earlier this week that they were considering starting Fromm after shutting down Daniel Jones for the rest of the season.

This doesn’t come as a surprise after veteran QB Mike Glennon tossed three interceptions in Week 15 before being relieved by Fromm for the final drive of the game.

In 2021, Fromm has appeared in one game and recorded six completions on 12 pass attempts (50 percent) for 82 yards and no touchdowns.