The New York Giants brought in free agent RB Devontae Booker for a workout on Friday, according to Field Yates. 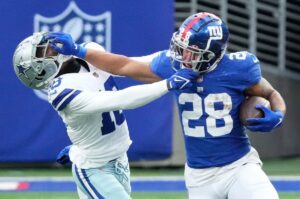 Booker, 30, is a former fourth-round pick of the Broncos back in 2016. He played out the final year of his four-year, $2.723 million rookie contract and signed a one-year deal with the Raiders in 2020. The Giants signed him to a two-year, $5.5 million deal last offseason.

He was set to make a base salary of $2 million next season when the Giants released him in March.