Titans LB Harold Landry has made it clear that he is hoping to re-sign with the Titans this offseason, with GM Jon Robinson saying that the team wants to “do everything we can” to retain his services. 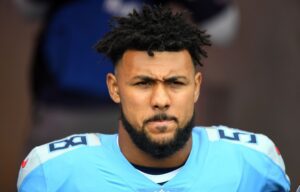 “It’s no secret that I love playing for the Titans, and my family loves living in Tennessee,” Landry said, via Jim Wyatt of TenneseeTitans.com. “So hopefully we can get a deal done.”

Landry made his first Pro Bowl appearance this year and feels that he has really hit his stride with the Titans.

“I know myself, and I know I am never really satisfied,” Landry said. “I am always trying to improve every year. So that’s what I am anticipating – the best is yet to come. I feel like I took strides every year I’ve been (in Tennessee), especially going into this past year. I feel like I grew so much as a player on the field, but also as a leader. And I think it just all came together this year. Right now, I am just focusing on enjoying my time here right now, but then getting back to work and improving some more.”

Dan Pompei of The Athletic previously reported that the Titans and the agent for Landry have had negotiations regarding a long-term extension.

Landry is set to become an unrestricted free agent in 2022.