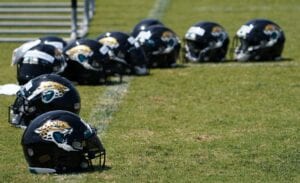 Godwin, 25, was originally a seventh-round pick by the Panthers in the 2019 NFL Draft out of Georgia. He signed a four-year, $2.6 million rookie contract but was among Carolina’s final roster cuts coming out of the preseason.

From there, Godwin signed on to the Jaguars’ practice squad and was on and off of the unit last year. Jacksonville re-signed him this past March.

For his career, Godwin has appeared in three games and caught three passes for 32 yards receiving and no touchdowns.

He had 20 punt returns for 148 yards and 24 kick returns for a total of 492 yards during his time at Marshall.

During his six-year career, Johnson caught 114 passes for 1,846 yards and 13 touchdowns. He also had 20 carries for 209 yards and two touchdowns.