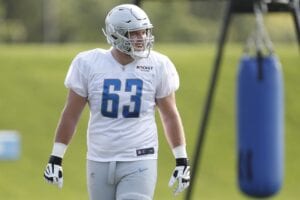 Should Hocker clear waivers on Thursday, he would revert to the team’s injured reserve list.

Benzschawel, 26, wound up going undrafted out of Wisconsin back in 2019. He later signed on with the Lions, but lasted just over one year in Detroit.

From there, the Texans signed Benzschawel off the Lions’ practice squad before being claimed by the Commanders last year.

Washington opted to waive Benzschawel earlier in the week.

In 2020, Benzschawel appeared in only one game for the Texans, and has only appeared in three total games during his NFL career.