O’Shaughnessy suffered a season-ending ACL tear last week, so this move was expected.

The Jaguars claimed O’Shaughnessy off waivers and he spent the past two years in Jacksonville. He played out the final year of his four-year, $2.473 million rookie contract and re-signed with the Jaguars this offseason.

In 2019, O’Shaughnessy appeared in five games for the Jaguars and caught 14 passes for 153 yards receiving and two touchdowns.

Koyack, 26, is a former seventh-round pick of the Jaguars back in 2015. He was waived a few months later and signed to the Jaguars practice squad.

Jacksonville brought Koyack back on a futures contract the following season and he managed to make the 53-man roster each of the next two seasons. Koyack returned to the Jaguars on an exclusive rights contract in 2018 but was waived from injured reserve with a settlement at the start of the season.

After returning to Jacksonville last year, the Jaguars once again made the decision to move on from Koyack coming out of the preseason.

In 2017, Koyack appeared in 16 games for the Jaguars and caught five passes for 38 yards receiving and no touchdowns. Pro Football Focus had him rated as the No. 35 tight end out of 71 qualifying players. 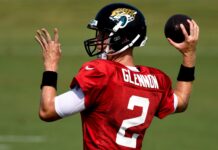