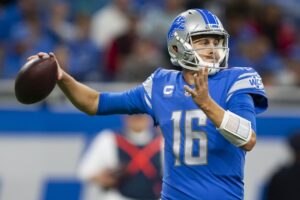 Goff has been sidelined with a knee injury.

In 2021, Goff has appeared in 13 games for the Lions and completed 67 percent of his passes for 3,007 yards, 17 touchdowns and eight interceptions.