According to Adam Schefter, the Jets have been exploring the trade market for potential ways to boost their pass rush in the wake of DE Carl Lawson‘s injury. 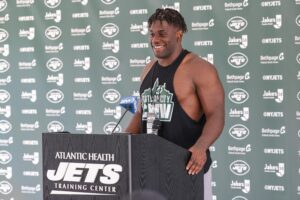 Lawson will miss the 2021 season with a torn Achilles. His absence leaves a huge void on the Jets’ defensive line, which is a critical part of HC Robert Saleh‘s scheme.

However, none of those options are proven and Blair just suffered a hamstring injury, per Rich Cimini.

NJ.com’s Mike Kaye reports that while the Jets aren’t openly shopping WR Keelan Cole, he’s someone who could be moved for the right price if it helps the Jets address their pass rush.

In this past week’s edition of NFLTR Review, we also highlighted Ravens OLB Jaylon Ferguson as a name that could be worth watching on the trade block.

We’ll have more on the Jets as the news is available.