Connor Hughes of SNY reports that there is “legitimate fear” that OT Mekhi Becton‘s 2022 season could be over due to the knee injury he suffered.

According to Hughes, the issue with Becton’s knee is related to his knee cap and patella. However, there’s fear there could be even more damage than that.

Mike Garafolo of NFL Media reports that the knee injury suffered by Jets OT Mekhi Becton is believed to be “more concerning” than the team originally believed after today’s practice. 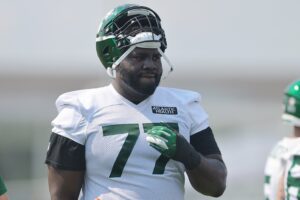 Garafolo says that Becton’s injury is a new issue and not related to his prior injury.

The plan is for Becton to get additional opinions on the injury tomorrow.

Becton, 23, was a three-year starter at Louisville and earned second-team All American honors before being selected by the Jets with the No. 11 pick in the 2020 NFL Draft.

In 2021, Becton was limited to appearing in just one game for the Jets due to a knee injury.