The New York Jets officially released CB Bennett Jackson on Sunday to make room for DE Shaq Lawson, whom they acquired earlier in the day from the Houston Texans. 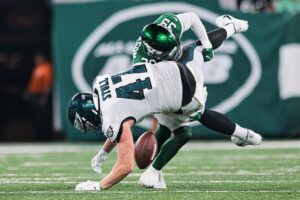 Jackson, 29, is a former sixth-round pick of the Giants back in 2014. He spent over two years in New York before he was waived at the start of the 2016 season and later signed to a futures contract by the Ravens.

Baltimore waived Jackson coming out of the preseason in 2019 and he was claimed by the Jets. New York waived him a few weeks into the regular season and re-signed him to their practice squad. The Ravens later signed him to their active roster before waiving him again and losing him via claim to the Jets.

Jackson was primarily a depth and special teams player for New York in 2020.

In 2020, Jackson appeared in four games for the Jets and recorded one tackle and no interceptions.