There have been a lot of reports connecting the Jets to Randy Moss but this is the first that we’ve about James Jones heading to New York. Obviously this deal is be no means a sure thing but it’s an interest one none the less.

Jones has plenty of upside but has had off and on catching issue throughout his young career in Green Bay. The market for Jones could really pick up in the coming days especially if teams get the feeling that the Jets are serious about signing him. 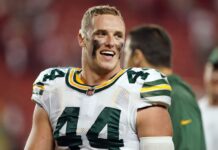