The New York Jets are signing RT Morgan Moses to a one-year contract on Friday, according to Sam Fortier. 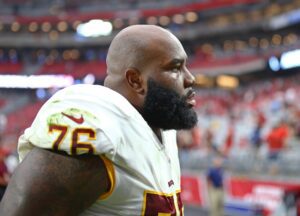 Ian Rapoport reports that Moses is signing a one-year contract worth $3.6 million worth up to $5.3 million based on whether he plays 80 percent of the team’s snaps.

Reports had said that the Jets were making progress on a one-year contract with Moses, so this doesn’t come as a big surprise.

The Bears had also been linked to Moses since he was released by Washington, but it was clear that the Jets were the team to beat in the end.

Moses should be an upgrade at right tackle over George Fant and provide New York with a bookend to promising LT Mekhi Becton.

Washington released Moses with two years remaining on his deal this offseason.

In 2020, Moses appeared in all 16 games for Washington and was rated by Pro Football Focus as the No. 18 offensive tackle out of 79 qualifying players.