The Detroit Lions signed fourth-round pick DT Caraun Reid to a four-year contract on Thursday, according to his agent Mike McCartney.

For the Lions, this is their first draft pick to sign his rookie contract.

Reid is an intriguing player the Lions as there was actually a decent amount of buzz regarding him throughout the draft process. He even had a good showing at this year’s Senior Bowl.

At Princeton, Reid totaled 168 tackles, 41 tackles for loss, 20.5 sacks and seven blocked kicks  over the course of his college career.

The Lions chose not to pick up Nick Fairley‘s fifth-year option, so it will be interesting to see if he’s able to carve out a role in year one as he could end up being part of the team’s long-term plans. 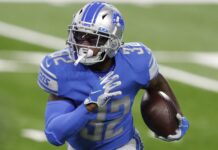