Bears HC Matt Nagy announced at a press conference Wednesday that QB Mitchell Trubisky would be day-to-day with his hip pointer injury.

Nagy added that as long as Trubisky was healthy enough to play he would start at quarterback for Chicago. Nagy did not know if Trubisky would be able to practice Wednesday, however.

Trubisky suffered the injury during the first half of Sunday night’s 17-7 loss to the Rams. It affected Trubisky enough that Nagy decided to bench him late in the game.

The Bears would turn to Chase Daniel at quarterback if Trubisky can’t go.

The contract includes a fifth-year option for the Bears to pick up in 2020.

In 2019, Trubisky has appeared in nine games for the Bears and completed 62.4 percent of his passes for 1,580 yards, nine touchdowns and four interceptions.

We’ll have more regarding Trubisky as the news is available. 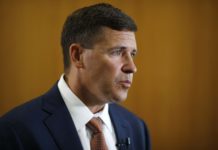