“Fred (Warner) brings the type of leadership and energy every day that our defense and team feeds off. He earned this extension through hard work, discipline and the professional way he goes about his business,” said Lynch, via Matt Maiocco.

Lynch added that they were eager to get a deal done ahead of training camp.

“We’re extremely excited to have completed a long-term contract extension with Fred prior to the start of training camp,” Lynch said, via NFL.com. 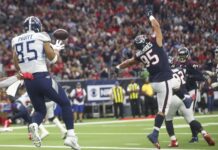