As expected, Bears QB Mitchell Trubisky opened training camp as the starting quarterback for Chicago. On day two of padded practices, though, his challenger for the starting job, QB Nick Foles, took the first snaps to open practice. Bears HC Matt Nagy said alternating days as the starter was part of the plan and that Trubisky has responded well to the competition so far.

“Whatever he’s doing, there’s just a great intention for him right now to play quarterback the best that he can and not worry about anything else,” Nagy said via Jason Lieser of the Chicago Sun-Times. “Mitch right now is in a place mentally that I really just feel like is really good. I like where he’s at.”

Packers second-year edge rusher Rashan Gary is ready to step up and be an impact player, after spending most of last season watching linebackers Za’Darius Smith and Preston Smith from the sidelines.

“That’s not even a question,” Gary said of his drive this upcoming season, via Mike Spofford of Packers.com. “Everything I did in the offseason to this point is about being the best me, coming back and being an impact player. You know that’s what I want to be, and that’s what I will be. So that’s just been my whole mindset, and I’m just down and grinding. My mindset is to be great. I’ve got a lot of examples in front of me last year watching ‘P,’ watching ‘Z’ and I know what it takes. My body is right, mind right, and just ready to go.” 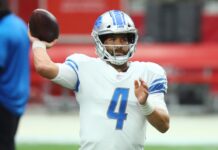