For the second consecutive offseason, the bulk of draft scouting will be done virtually due to restrictions from the COVID-19 pandemic. The Falcons will need to rely on scouting more than most teams to fill out their roster with cheap rookie talent and HC Arthur Smith says they have lessons they’re going to try to apply from last year. Left unspoken was how much of a flop his team last year, the Titans, had in the first round with OT Isaiah Wilson.

“I think you learn from every experience,” Smith said via D. Orlando Ledbetter of the Atlanta Journal-Constitution. “Just because that happened, there are so many factors and variables. Whether we were in [virtual] era or normal, there are things you can’t control. We are never going to be perfect, and I don’t think anybody is. . . . Certainly, you try to minimize risks in certain areas, but there are lessons learned in everything we do. In terms of how we adapted our teaching methods. You adapt it to how you interview. That certainly helped me when we were interviewing coaches. But you learn from everything. There are always exceptions. I don’t really want to comment on something going on in Tennessee.” 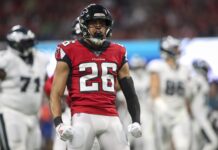