Expectations for rookies this year around the NFL will be tempered, but the Eagles could really use a big debut season from first-round WR Jalen Reagor. A lack of speed and playmaking hurt the team last year when WR DeSean Jackson got hurt, so Philadelphia zeroed in on Reagor as insurance this year and a long-term successor. The team has been easing Reagor into the offense slowly behind Jackson this spring, but the veteran has exhorted the rookie not to limit himself.

“He just told me to go in with a mission on my mind,” Reagor said via NJ.com’s Mike Kaye. “Go in with a chip on my shoulder, and just know that I can make a big contribution. It’s the reason why this organization drafted me. They believed in me. (He said) don’t just wait at the back, just go ahead and step in now.” 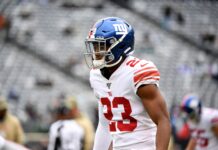 186,698FansLike
7,623FollowersFollow
276,460FollowersFollow
© NFLTradeRumors.co is an independent news source and has no affiliation with the National Football League (NFL), NFL.com, or any team(s).
wpDiscuz