“I’ve buried the injury, honestly guys,” said Prescott, via Jon Machota of The Athletic. “From the point of practice, from the point of just moving forward and going about my life, I’ve buried it. I’ve buried it mentally. And I think you guys and a lot of people around have to help me and bury it as well as we move forward.”

Prescott explained that he felt fully recovered from his injury on May 5 after he “did some little dance moves” when celebrating Cinco de Mayo.

“I’d honestly say about a month ago,” he said. “Somewhere around Cinco de Mayo. Yeah, I had a good Cinco de Mayo, was a little active and at that time maybe did some little dance moves and I felt like I’m ready to go. So that was the time that I said in my head, ‘The injury’s gone.’”

Eagles’ QB coach Brian Johnson, has good things to say about what veteran QB Joe Flacco has brought to the team atmosphere.

“Joe has been great,” Johnson said, via Mike Kaye of NJ.com. “I’ve obviously watched him for a very long time and he has a ton of experience. I always say ‘experience is life’s best teacher,’ so he has a lot of intellectual property that he’s been willing to share with our room, and it’s been great for our room to hear from some of his shared experiences throughout his career in the league.”

“He’s just as smooth as they come,” Johnson said. “He’s done it for a really long time, so he understands exactly what the goal is, what he’s trying to accomplish, how he can continue to improve and put us in a position to be successful.”

Giants RB Saquon Barkley isn’t trying to think too far ahead of his torn ACL rehab.

“You know me. I’m going to take it one day at a time. Just come in with my head down and ready to work,” Barkley said, via ESPN’s Jordan Raanan. “It’s going to be whenever my body tells me I’m ready or I’m able to show everyone I’m ready again. That’s when I’m going to be able to go out there and hopefully be elite, what I was before but even better.”

Barkley added his goal is to just come back at 100 percent, regardless of when that occurs.

“At the end of the day, I want to come back and be the best that I can for my team, not just for a short span but for a very long time,” Barkley said. “Like I said, I have no expectation of a set date or when I’ll be full-go in this. I’m just going to come in and work every single day because that is what I know.”

“We are going to make sure that we take Saquon’s rehab at the correct rate for his individual body and injury,” Judge said Tuesday. “It’s not any mirror of anybody else’s injury out there. We have to make sure that we let him get it at his pace and put him on the field [when he] can play 100% aggressive and confident and he’s going to play safe and he can play effective.”

Barkley told reporters that he isn’t thinking about his contract situation.

“When it comes to the contract situation that’s not even something that’s crossing my mind. I have an amazing agent. Those are things I have conversations with her about,” Barkley said, via Pat Leonard of the New York Daily News. “But for me right now the only thing I’m focusing on is coming here today, working my butt off, and trying to get as ready as I can so when I’m able to get back out there … I’m 110 percent and I can perform to the best of my abilities for my team.” 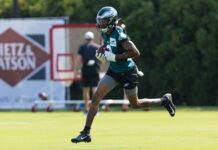 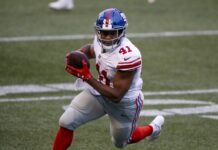