Washington HC Ron Rivera said they want to find the “right” quarterback after missing out on the trade for Matthew Stafford.

“We’ve got to make sure we find the right one,” Rivera said, via John Keim of ESPN. “Is it imperative to find the right guy now? No, not necessarily.”

Rivera mentioned that Washington’s offense does not dictate whether they require a pocket passer or mobile quarterback.

“One of the beauties of what we do offensively is we’re not stuck on one particular style of play for our quarterback,” Rivera said. “We’re stuck on the right kind of person.”

Rivera added that while they are “exploring options,” Washington is currently focused on its four quarterbacks Alex Smith, Kyle Allen, Taylor Heinicke, and Steven Montez.

“We have four guys and right now those are the four guys we’re looking at, but also exploring options,” Rivera said. “We’re in a tough situation because it’s so early in the offseason.”

As for the Lions’ acquiring a 2022 and 2023 first-round picks and QB Jared Goff from the Rams, Rivera mentioned that Washington wanted to avoid overspending and would’ve felt uncomfortable parting with the package Detroit ultimately got from the Rams.

“I like trades, but I don’t like coming away from a trade feeling it was one-sided,” Rivera said. “If we had dove into what happened with the Detroit trade, I don’t know how I would have felt about it. I’m ambivalent to it. But I don’t think that’s something I would want to do. If you get what you want, but you don’t have what you need, then you create problems. If you can’t protect the quarterback, or if you don’t have playmakers around him, then what’s the good of having that guy? We’re still building our roster. We have to be very careful with the decisions we make.” 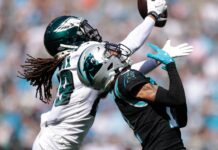