Cowboys TE Dalton Schultz is going into the 2021 season with a high level of confidence and looks forward to being a part of the team’s “two-headed monster” next year with himself and fellow TE Blake Jarwin.

“I had a lot of confidence going into last year, before any of those catches in those games happened,” Schultz said, via CowboysWire. “If anything, I just think it kind of springboarded my confidence in myself and continued to lead me to focus even more on my techniques and hone in on that work with Dak and getting the little nuances down in certain coverages and different routes. So I think it opened the door to a whole new level of preparation, and I’m excited to continue to go forth in my preparation here.”

“The ball’s coming out the same as it was before the injury,” Schultz explained. “It all looks the same to me; ball’s in my hands the same exact way.”

Jarwin is also excited to getting back on the field, and he anticipates being ready for the start of training camp.

“I want to get out there, and it’s been a long time since I’ve been able to run full speed and catch a ball,” Jarwin said. “But you’ve just got to understand and trust the plan, trust the process… I’ll just keep pushing along, and I anticipate, Day 1 of training camp, being ready to roll.”

While it was Jarwin’s injury that opened the door for Schultz to break out, there’s no one pulling for Jarwin more than his teammate for a healthy return.

“Dude, I am so excited for Blake to get back on the field,” Schultz said, not even waiting for the whole question to be asked. “I love working alongside a guy that I can really trust. Obviously, we’ve had a few years of work together. He is one of the hardest-working guys in the locker room. We kind of pride ourselves on that in our room, being the grinders who will go in day in and day out, do our part. I am so excited to see him back on the field. ACLs are brutal. Especially to go down like that, in Game 1. He’s putting so much hard work and time in. He’s still got a ways to go, but, dude, I can’t wait to see him finally go out and prove to everybody that he’s the tight end that everybody thinks he is. I’m excited to have that two-headed monster in the room that hopefully can take advantage of defenses this year.” 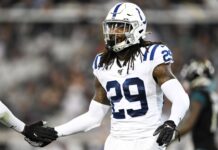