Buccaneers RB Leonard Fournette mentioned it took him some time to get over getting released by the Jaguars. Fournette notably didn’t hit his stride in Tampa Bay until the playoffs and was close to being cut for a second time late in the season.

“I think when I got cut, it kind of just set me back to what I used to do,” Fournette said, via JoeBucsFan.com. “You know, I had to get my rhythm back. It was bothering me all through the season when I got signed by the Buccaneers. Every day, I’m like, ‘Damn, I really got cut.’ So it was bothering me, too. So I had to just get my mind right, get adjusted. I was still new here, too.”

Panthers’ HC Matt Rhule says that he and his staff have taken the time to get on the same page as the players this offseason.

“I think last year we were spending a lot of time trying to figure out who we were in our base stuff,” said Rhule during a press conference. “So I think right now, the end of the game, the red zone — I think our guys are more comfortable. And I think our coaches are more on the same page with the players.” 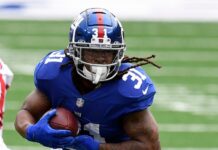