Heading into the draft, there had already been plenty of talk regarding whether or not the New Orleans Saints would be retaining RB Reggie Bush for the upcoming season. Most of this speculation was based on the fact that Bush’s 2011 salary is set to pay him a staggering $11.8 million. Bush had already told the team that he was willing to renegotiate his deal so that he could remain with the team.

Last night the Saints basically decided that they would rather cut him out right rather pay him because they traded back into the first-round and grabbed the No. 1 RB prospect in Mark Ingram at No. 28.

Reggie tweeted “It’s been fun New Orleans.” which appears to be a good bye to the city of New Orleans following the draft last night.

Yahoo Sports’ Jason Cole heard from one source that “this just makes the whole thing easier for everybody.”

New Orleans already has Pierre Thomas and Chris Ivory as a part of their backfield, add in Ingram and it really starts to look like Bush is the odd man out. 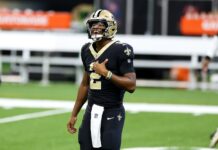