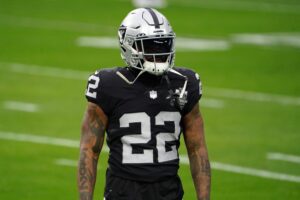 Nixon, 24, wound up going undrafted out of South Carolina back in 2019. He played out the final year of his three-year rookie contract.

However, the Raiders declined to tender Nixon an offer as a restricted free agent this offseason. He later signed on with the Packers in March.

In 2021, Nixon appeared in 11 games for the Raiders and recorded nine tackles and no interceptions.