The Packers hired Vrable in 2019 as an offensive assistant, and he was promoted to wide receivers coach in 2020. 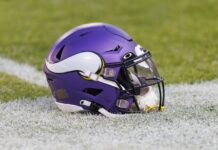