The Green Bay Packers are expected to sign WR Seth Roberts to their practice squad, according to Rob Demovsky of ESPN. 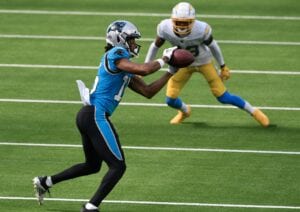 The full list of players on the Packers’ practice squad includes:

Roberts had come up as a trade candidate in recent months, but it was clear there wasn’t a market for him.

Roberts, 29, signed on with the Raiders as an undrafted free agent out of West Alabama back in 2014. He wound up spending the season on Oakland’s practice squad before signing a future/reserve contract in December of 2015.

Roberts returned to the Raiders on a one-year, exclusive rights contract in 2017 before signing a three-year, $12 million contract that included $6.45 million guaranteed. He was set to make a base salary of $4.45 million for the 2019 season when the Raiders released him.

From there, Roberts caught on with the Ravens on a one-year deal for the 2019 season and joined the Panthers this past March. Carolina released Roberts earlier in the day.

In 2020, Roberts has appeared in seven games for the Panthers, recording four catches for 31 yards.