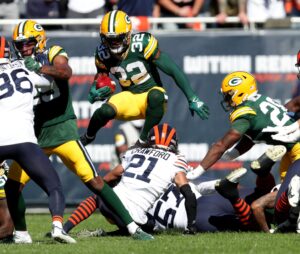 According to Ian Rapoport, Hill specifically suffered an ACL tear.

Hill was hit on the knee upon returning a kickoff and was later carted off of the field, so indications were that this was a pretty serious injury.

Hill, 23, was a seventh-round pick by the Packers in the 2021 NFL Draft out of Mississippi State.

Hill signed his four-year rookie deal worth $3.55 million with the team in May.

In 2021, Hill has appeared in eight games for the Packers, rushing ten times for 24 yards and catching one pass for five yards.

We will have more news on Hill as it becomes available.