According to Matt Schneidman, the Packers have brought in QB Jake Dolegala for a tryout on Tuesday. 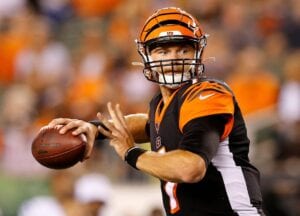 With Aaron Rodgers not at mandatory minicamp this week, the Packers have Jordan Love, Blake Bortles and Kurt Benkert on the roster.

The Patriots signed Dolegala to their practice squad soon after and spent the rest of the season on and off of the unit. New England waived Dolegala in April.