According to Rob Demovsky, the Packers brought in four players for workouts on Monday including former Raiders WR Saeed Blacknall.

Blacknall, 23, wound up signing on with the Raiders as an undrafted free agent out of back in 2018. He agreed to a three-year, $1.71 million contract but was waived coming out of the preseason.

The Raiders signed Blacknall to their practice squad after he cleared waivers and was on and off of the unit throughout the 2018 season. Oakland elected to waive him during camp and he was claimed by the Dolphins.

During his college career at Penn State, Blacknall caught 50 passes for 979 yards receiving and seven touchdowns over the course of four seasons and 34 games. 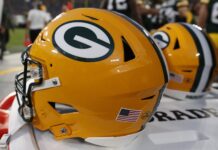