The Carolina Panthers announced Tuesday that they’ve claimed RB Trenton Cannon off of waivers from the Jets and cut RB Rodney Smith. 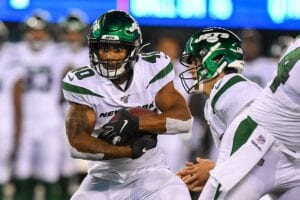 For his career, Cannon has appeared in 20 games for the Jets and rushed for 113 yards on 38 carries (3 YPC) to go along with 17 receptions for 144 yards receiving and one touchdown.

During his college career at Virginia State, Cannon appeared in 38 games and rushed for 4,246 yards (7.1 yards/carry) and scored 46 touchdowns. He also caught 51 passes for 638 more yards and seven more TDs while helping out on special teams.

186,509FansLike
7,623FollowersFollow
276,042FollowersFollow
© NFLTradeRumors.co is an independent news source and has no affiliation with the National Football League (NFL), NFL.com, or any team(s).
wpDiscuz