According to Aaron Wilson, the Panthers are activating RB Rodney Smith and CB Kenny Robinson to the active roster for their game this week. 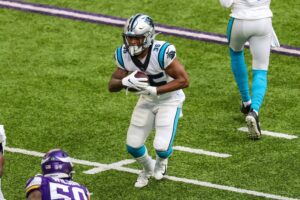 Smith, 25, wound up going undrafted out of Minnesota back in 2020. He later agreed to a three-year, $2.28 million contract with the Panthers but was cut loose coming out of the preseason.

Carolina brought Smith back and he’s been on and off of their roster ever since.

In 2020, Smith appeared in seven games for the Panthers and rushed for 156 yards on 41 carries (3.8 YPC) to go along with nine receptions for 59 yards receiving and one touchdown.