According to Ian Rapoport, the Panthers are placing K Zane Gonzalez on injured reserve with his quad injury. 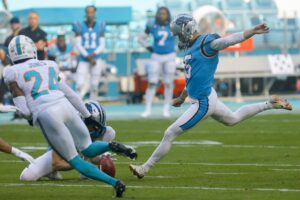 Gonzalez went down on Sunday during pregame warmups against Buffalo but Rapoport says the injury ended up being not as serious as initially feared, with a prognosis of four weeks rehab.

The Cardinals later signed Gonzalez to their practice squad before promoting him to their active roster during the 2018 season. Arizona brought him back on a one-year restricted tender in 2020 worth $3.27 million.

Gonzalez was testing the market as an unrestricted free agent for the first time in his career this offseason when he signed a one-year deal with the Lions. Detroit cut him coming out of the preseason, though, and re-signed him to the practice squad. Carolina signed him away to their active roster.