Jim McBride of the Boston Globe reports that the Patriots are activating OLB Matthew Judon, LB Ja’Whaun Bentley, and DB Brandon King from the COVID-19 list for their Week 17 game. 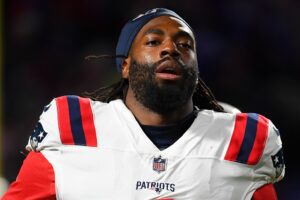 The team is also activating QB Brian Hoyer and LB Josh Uche from the COVID-19 list.

Judon, 29, is a former fifth-round pick of the Ravens back in 2016. He played out the final year of his four-year, $2.595 million contract before being franchised by the Ravens.

Judon was once again in line to be an unrestricted free agent when he signed a four-year, $56 million deal with the Patriots.

In 2021, Judon has appeared in 15 games and recorded 57 total tackles, 13 tackles for loss, 12.5 sacks, one fumble recovery and one pass deflection.