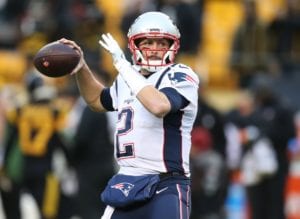 Hoyer will miss at least the next four games while on injured reserve before he can be activated.

Hoyer left Week 4’s game against the Packers after suffering a concussion and was replaced by Bailey Zappe, who is now in line to start if Mac Jones is unable to return from the ankle injury he’s been dealing with.

It’s worth mentioning that the Patriots signed Garrett Gilbert to their practice squad, so he could serve as their backup if Jones misses another week.

Hoyer, 36, originally signed with the Patriots as an undrafted free agent out of Michigan State in 2009. He spent three years in New England before bouncing around with a number of teams including the Steelers, Cardinals, Browns, Texans, and Bears.

From there, Hoyer signed a three-year, $12 million contract with the Colts in 2019 but was released before the 2020 season. Hoyer returned to the Patriots soon after on a two-year deal worth $4 million.

In 2022, Hoyer has appeared in one game for the Patriots and completed 5 of 6 pass attempts for 37 yards and no touchdowns.