Underwood gained notoriety leading up to Super Bowl after being deactivated the night before the Super Bowl.

ESPN’s James Walker writes that the Patriots will have room for “six or seven” wide receivers next season, which will leaves a few of them on the roster bubble.  Walker adds that WR Julian Edelman “looks like the definite odd man out” not that the Patriots have signed WR Jabar Gaffney to a two-year deal.

If the Patriots do indeed cut Edelman, they would still have 11 wide receivers on their roster and would need to cut around at least another four before the regular season starts. This obviously applies even more pressure to guys like Anthony Gonzalez, and Donte’ Stallworth, Chad Ochocinco and Deion Branch 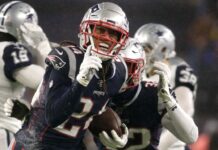