The Las Vegas Raiders announced that they have placed FB Alec Ingold on injured reserve due to a torn ACL and activated DB Roderic Teamer. The team is also elevating LB Sutton Smith from the practice squad for Sunday. 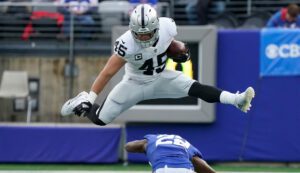 Ingold, 25, went undrafted in the 2019 NFL Draft and later signed a three-year rookie contract with the Raiders worth $1.765 million and $10,000 guaranteed. He will be a restricted free agent this offseason.

In 2021, Ingold has appeared in eight games for the Raiders, logging two carries for one yard and nine receptions for 80 yards and a touchdown.