According to Adam Schefter, the Raiders are releasing DE Carl Nassib on Wednesday. 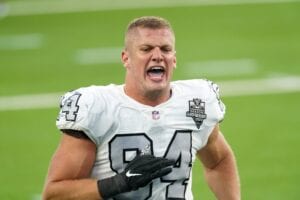 Schefter notes that Las Vegas is cutting Nassib with a post-June 1 designation.

The Raiders will create $8 million in cap space by releasing Nassib in June and create $1,652,000 in dead money, per OverTheCap.

Nassib, 28, is a former third-round pick of the Browns back in 2016. He was in the third year of his four-year, $3.59 million rookie contract when Cleveland waived him coming out of the 2018 preseason.

He was quickly claimed by the Buccaneers and finished out his rookie deal. Nassib signed with the Raiders in 2020 and was set to enter the second year of his three-year, $25 million deal when Las Vegas converted $2.51 million of his base salary into a signing bonus.

Nassib became the first NFL player to come out as gay while still in the league.