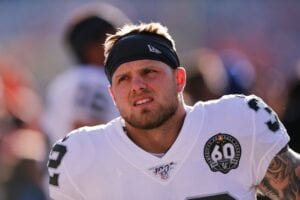 The Raiders used an original-round tender on Leavitt that cost them $2.43 million back in March.

Leavitt, 27, wound up going undrafted out of Utah State back in 2018. He later signed a three-year, $1.71 million contract with the Raiders.

Las Vegas waived Leavitt coming out of training camp and later re-signed him to their practice squad.

He was eventually called up towards the end of the 2018 season and returned to the Raiders on a one-year contract. Leavitt was then waived by the team coming out of camp and re-signed to the practice squad.

In 2021, Leavitt appeared in 16 games for the Raiders and racked up 35 tackles and two fumble recoveries.