Adam Schefter reports that the Raiders are signing former Jaguars and Jets WR Keelan Cole to a one-year contract on Wednesday. 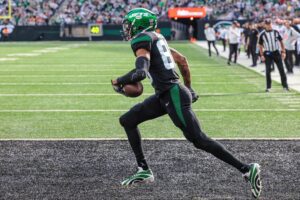 Cole, 29, signed with the Jaguars as an undrafted free agent out of Kentucky Wesleyan in 2017. He signed a three-year rookie contract with the Jaguars and returned to Jacksonville on a one-year restricted deal for the 2020 season.

Cole was testing the open market as an unrestricted free agent last offseason when he agreed to a one-year contract with the Jets.

In 2021, Cole appeared in 15 games for the Jets and caught 28 passes for 449 yards receiving and one touchdown.