The Las Vegas Raiders officially waived DL P.J. Hall after their trade with the Vikings fell through. The Raiders also placed LB Ukeme Eligwe on the reserve/opt-out list on Tuesday. 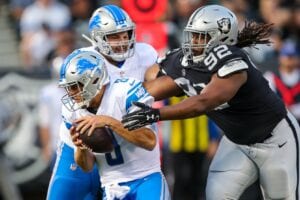 Eligwe is the third Raiders’ player to opt out of the 2020 season:

In 2019, Hall appeared in all 16 games for the Raiders and recorded 26 total tackles, five tackles for loss and 1.5 sacks.