The Las Vegas Raiders brought in three running backs for tryouts on Tuesday including LeVante Bellamy, Quay Holmes, and Brenden Knox, according to Aaron Wilson. 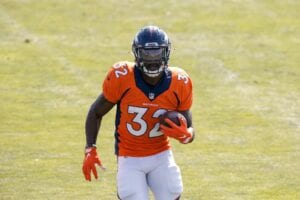 Bellamy, 26, wound up going undrafted out of Western Michigan back in April. He later signed a three-year, $2.28 million contract with the Broncos, but was waived coming out of training camp.

The Broncos later added Bellamy to their practice squad and later added him to their active roster. He was placed on injured reserve with an ankle injury during the preseason and was cut back in December.

In 2020, Bellamy appeared in five games for the Broncos and rushed for 11 yards on four carries to go along with one reception for five yards and touchdowns.