According to Gary Klein, the Rams announced that they are activating CB Darious Williams from injured reserve. The team is also elevating DB Antoine Brooks and DL Marquise Copeland from the practice squad this week. 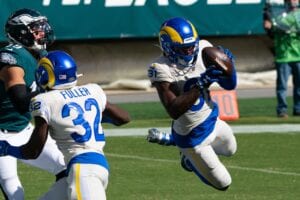 Williams, 28, wound up going undrafted out of UAB in the 2018 NFL Draft and later signed a rookie deal with the Baltimore Ravens. The Ravens released Williams in October of 2018 where he was claimed by the Rams.

Los Angeles chose to tender Williams this past offseason, making him a restricted free agent.

In 2021, Williams has appeared in five games for the Rams, picking up 29 tackles to go with two passes defended.