Jordan Schultz reports that the Rams are re-signing LB Travin Howard to a one-year deal after releasing him just six days ago. 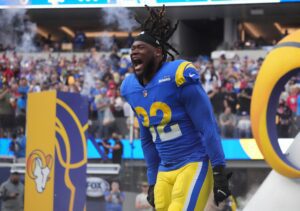 The Rams had re-signed Howard to an RFA tender worth $2.54 million back in April. However, they opted to release him before agreeing to a three-year, $80 million extension with WR Cooper Kupp on Wednesday.

Unfortunately, the Rams waived Howard with an injury designation during the preseason and he later reverted to their injured reserve list. Los Angeles cut him loose with an injury settlement soon after. He returned to Los Angeles’ practice squad midseason and re-signed on a futures deal for the 2019 season, he returned on another one-year deal last offseason.

In 2021, Howard appeared in 12 games and recorded 21 tackles, one interception, and three pass defenses.