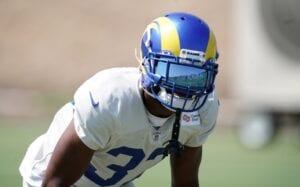 This comes a few weeks after McGhee was suspended without pay for the first five games of the 2021 regular season for violating the NFL policy on performance-enhancing substances.

McGhee, 22, wound up going undrafted out of Georgia back in May of last year. He later signed on with the Rams before being waived coming out of training camp.

Los Angeles re-signed McGhee to their practice squad before bringing him back on a futures contract.

During his college career at Georgia, Tyrique McGhee appeared in 33 games and recorded 57 tackles, a half sack, two interceptions, two forced fumbles and nine passes defended over the course of four seasons.