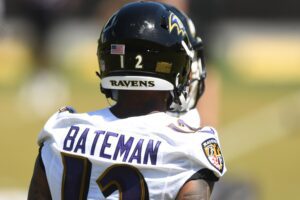 Bateman, 21, was a three-year starter at Minnesota and was a first-team All-Big Ten selection as a sophomore. He opted out after seven games in 2020.

The Ravens will have a fifth-year option to pick up on him in 2024.

During his college career at Minnesota, Bateman caught 147 passes for 2,395 yards receiving and 19 touchdowns over the course of three years and 31 games.