The Baltimore Ravens have claimed OT Brandon Knight off of waivers from the Cowboys on Monday, according to Field Yates. 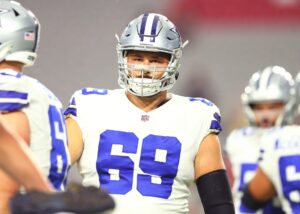 Knight, 24, wound up going undrafted out of Indiana back in 2019. He later signed a rookie contract with the Cowboys.

Dallas opted to waive Knight last weekend. He’s currently in the final year of his contract.

For his career, Knight has been active for 21 games and made 10 starts.