ESPN’s Dianna Russini reports that Rams QB Matthew Stafford has been dealing with pain in his throwing arm, his elbow, a sore ankle, and chronic back pain. 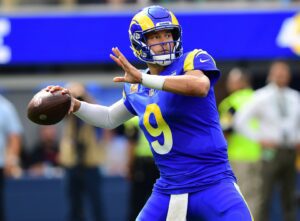 Even so, Stafford plans to play in Week 12’s game against the Packers, despite his injury issues.

Stafford has not been on the injury report and has taken practice reps throughout the week, but it sounds like he’s toughing it out as usual.

The Rams have John Wolford and Bryce Perkins on their active roster should be forced to miss time at some point.

Stafford was involved in a blockbuster trade that sent him to the Los Angeles Rams in exchange for QB Jared Goff and draft picks this past offseason.

In 2021, Matthew Stafford has appeared in 10 games for the Rams and completed 67.7 percent of his passes for 3,014 yards, 24 touchdowns and eight interceptions. He also rushed for 38 yards.